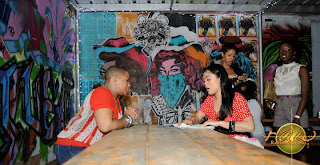 Ain't No Sunshine When She's Gone

Born and raised in Chester, Pennsylvania, Avery grew up with parents who exposed her to a variety of artists such as The Clark Sisters, Earth Wind & Fire and Aretha Franklin. Nurturing her natural inclination to soulful music, she experienced the first stages of her Gospel roots while participating as a member in the Wilmington/Chester Mass Choir.

The predisposed-manufactured-in-music-history climax to her story one would assume is actually invalid for Ms. Sunshine. That's because at first she wasn't sure her path would take on the artist role, but instead as choir director or the sort.

Since Avery took on her independent artist route, the acclaim followed. Jet Magazine named her as one of "2011's Independent Artists To Look Out For." Before that, she was very active on the scene, lending her talents for the 2008 Democratic Convention as well as performing at events during President Obama's 2009 Inauguration.

Her self-titled 2010 album release, Avery Sunshine placed on Itunes R&B/Soul charts and her track "All In My Head" peaked at #15.

Like many who have interacted with the songstress that is Avery*Sunshine, her charisma is addicting and contagious.

Singer/songwriter/pianist Avery Sunshine sat down with The M Report to discuss her recent Texas shows, the message behind her music and what's next for this rising artist.

M: You were working the crowd tonight.
A: Oh my God, thank you.

M: They gave you a lot of love?
A: Oh my God, Oh my God. And it’s amazing to play in front of people who’ve never ever seen me before, knew nothing about me and they still give me the love. That is awesome.

M: You’re on a Texas tour, seems like.
A: This is my last stop. I leave tomorrow morning, I wish I could stay longer.

M: Is this your first time in Texas?
A: No, it’s not my first time. I was here when I played with Tyler Perry, one of his shows. I did a play called Meet the Browns. So I was here, I think five or six years ago. I was in Beaumont. And I came to Hempstead, one of my aunts is from Hempstead.

M: Coming to Soulcial Series and bringing your music to Houston, how did that come about?
A: My agent called me and told me I had some dates. I said, really. She said I want to get you in Texas and this is a great opportunity to do it. And guess what, you’re going to be with Eric Roberson, twice. So it worked out. And of course I couldn’t say no.


M: With your music, you call yourself a “healer” through the power of music. Explain more about that.
A: I feel like we hope to heal ourselves and each other when we talk about our experiences. It’s real simple, you know what I mean. And it seems like, whatever you’re dealing with, the load is a little lighter when you know that you’re not the only one dealing with it. And the only way you can know is if someone is talking about it. And I feel like it’s my duty, it’s my responsibility to talk about it. I know a lot of us are not free to do that. And it’s taken me a minute to get to a point where I can talk about divorce, and talk about, you know, foreclosure and those things. Stuff that people are going through that they don’t want to deal with. I say listen, if I’m up here on the stage telling you about it, it’s going to be okay. It’s about their empowerment. I don’t want to be too presumptuous and call myself a healer, but I will definitely say I hope to help in the healing process or aid in the healing process. Not only am I healing myself, but my sisters and brothers.

M: So what inspires you?
A: My children inspire me, God inspires me, and definitely the people who listen to my music inspire me. You know, this interview inspires me. Everything. The good food I had inspired me! I think I was in Austin, I had something, I don’t remember what it was!

M:I wanted to ask about your music video “All In My Head” which was the last song you performed tonight, what was your vision behind that video?
A: We as women, we hear one thing and we make it into something else. And I kind of wanted to poke fun and you know, kind of show it. It’s not what you think it is. We even see it and we just make it something else. So I hope people get it.


Be sure to check out her music on Itunes HERE as she's currently making her way for shows in the UK.