WHAT IS THE M REPORT?

The M Report thrives on building a sense of community and telling stories of everyday people in the communities that we're a part of. If you have an event that you want the M Report to cover, check out the Contact Tab and let us know!

She has appeared on the streaming digital channel Redstormsports.com, ESPN's "SportsNation," New York TV Pilot "4 The Record" and Chicago's 87.7 The Game.

Born and raised in Houston, Texas, Melissa started modeling for a local Texas agency at the age of 16. Realizing her confidence in front of the camera tied with her passion for telling stories, she put her focus on becoming a successful broadcast journalist with dreams of going to college in New York City.

After being accepted to St. John's University in Queens, Melissa made her way to New York in 2005 on an academic scholarship. There she continued her involvement with sports as a walk-on to the St. John's cheerleading team. Melissa also played intramural volleyball and basketball throughout her college years. She graduated in 3.5 years as an honor student majoring in Journalism with a minor in International Studies. During one of her last semesters, she decided to “discover the world” and studied abroad in France, Spain and Italy.

Her television experience included hosting St. John's University sports segment, Sportswire, on WRED-TV. As far as her internship experience, it included working for CBS College Sports/Powerade, documenting her campus's intramural sports and interviewing student athletes. She also interned with WABC-TV "7 on Your Side" and Entertainment Tonight/The Insider. She wrote feature and entertainment articles as a staff writer for her university's campus newspaper, The Torch, until she became an intern at The Source Magazine. Working hard throughout that particular journey allowed her to be published as part of the magazine's first time launch of “The Fashion Report,” a comprehensive list of the top 30 brands in urban fashion.

With hopes of gaining further opportunities, Melissa entered a nationwide competition with Nikewomen.com and was chosen among thousands to help cover New York City as a Nike Field Reporter-Correspondent. Her stories took her from the ESPN campus in Bristol, Connecticut to a NCAA Division I women's basketball game in Oklahoma City for the Kay Yow Foundation. At the same time, she balanced being a sideline reporter for RedStormSports.com StormTracker All-Access, streaming live interviews with players and coaches. She freelanced for CBS Sports, working such events as March Madness  and The NFL Today. Her stories covering professional athletes were published on AthletesLiveHere.com.

Her list of interviewees range from Olympic athlete Kara Goucher, ESPN anchor Hannah Storm to artists such as Kel Spencer and Shade 45 Sirius XM’s DJ Statik Selektah as a segment host on TV pilot 4 The Record.

By the end of 2015, Melissa started her role as a digital producer at Comcast Sportsnet-MidAtlantic in Washington, D.C. It wasn't until early 2016 when she was able to fulfill her dream of working in higher education. Her lectures on communications are part of an accredited course at the College of Mount Saint Vincent, in the Bronx, New York.

In the spring of 2016, Melissa was invited to the final round of the national search for the 2016 Ailes Junior Reporters Charlie Team at the Fox News Channel headquarters in New York City.

Yet in the beginning of 2017, she brought her talents back to New York City for good with her position as a News Reporter/Editor at The Tablet, a weekly Catholic newspaper based in the Diocese of Brooklyn that is distributed around the country.

She is an active member of the following associations:

A lover of all things food and culture driven, if Melissa is not on the scene or traveling, she's curling up to a great read with her pup, Gigi, or bringing her high energy and enthusiasm to volunteer with youth in her community. 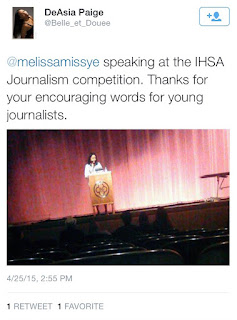