Underneath the persona that is known to the masses as the independent hip-hop group H.I.S.D, exists a platform that aims to expose progressive artistry in a variety of mediums. Peace UV Mine Entertainment, pronounced “peace of mine,” has just about 14 artists underneath their management. One might suggest calling their efforts a Houston-bred grassroots artist label with a dynamic roster of emcees, poets, vocalists and visual artists.

Herein lies Krystal Hardwick, a 24-year old model/singer/songwriter hailing from Katy, Texas. Hardwick’s music speaks for itself and breaks the boundaries of one-dimensional R&B sounds from the south. One artist who has successfully captivated a following with her unique sound is Janelle Monáe, who hails from Kansas City. Nonetheless, Hardwick and Peace UV Mine Entertainment set forth a night dedicated to becoming familiar with her artistic forte that is sultry and electro-acoustic melodies.

The event took place at Check Other Outfitters, an urban fashion boutique, with sounds provided by H.I.S.D’s own Flash Gordon Parks on the 1s and 2s. The night silently screamed hip-hop from the store dripped in graffiti-like art as the backdrop to the shoes, to the pages of poetry inside Totems to Hip-Hop on display in the small lounge area. All that was missing was Hardwick’s album, “The Tale of Two Fish” to play through the speakers.

Interestingly enough, the production work on her album was mainly exported from European countries such as Turkey, Italy, Switzerland and London. The final mastering was done by King G of H.I.S.D, therefore re-aligning the sound back with its Houston roots. But the final product was far from anything I’ve heard coming from these neck of the woods. For any R&B artist to reach a crowd of acceptance, I believe versatility and talent must intercede each other to make room for growth. If that’s the case, Hardwick set a solid foundation.

“The Tale of Two Fish,” will be released on both her personal website and her labels on March 22 through the option of a digital download or mailed CD. 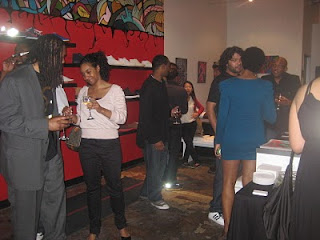 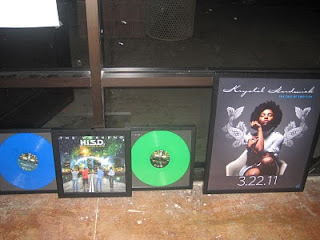 To listen to her songs:
HERE

& I found this Billie Holiday cover she did.
HERE