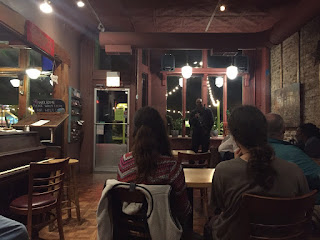 A lively crowd filled with musicians and poets gathered in one roof to share their art.

The energy was amazing.

I wanted to share my latest written piece. In case you can't watch the video below or if you prefer to read my poem in written form, I got you either way! Enjoy.


'the thrill of falling'

she doesn't give off the usual signals
her clothes aren't in disarray
her hair isn't a mess
she maintains her cool
But at the moment she had to jump
she doesn't think twice
the bottom wasn't going to hurt anymore
so she closed her eyes
and forgot her heart
Who's going to save her?
the moment she loses her grip again
will he extend his arm?
will he take a step in her direction?
before it's too late
she whispers goodbye
swiftly, softly, smoothly
His eyes are set
he sees her
and he doesn't know why but he holds on
if even for one second
because maybe the risk is worth something
no one really knows
maybe that's the thrill of f a l l i n g
with no expectations
something mysterious
nothing serious
she just forgot that her wings
even exist
How can the unknown meet at the point it's supposed to?
what if it's a disastrous crash?
an oxymoron of moments
two stars set in motion
reaching for the sky
swiftly, softly, smoothly
Her eyes are set
she sees him
and she doesn't even know why but she holds on
if even for a second
maybe that's the thrill of getting back up.