CBS's Megan Mawicke Shares Her Experience as a Sports Journalist 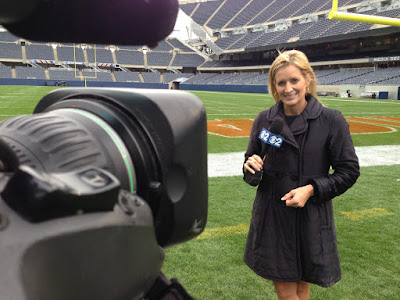 "One thing I'll never be is unprepared."

It wasn’t necessarily luck nor was it fate: it was hard work and preparation that Megan Mawicke credits as the ‘secret weapon’ on her journey to success. Eleven years ago, it was that combination that helped reaffirm her credibility on Chicago’s sports reporting roster as an anchor at WBBM-TV.

Early in the 2004 NFL season, Mawicke was set to cover the afternoon Bears-Giants game in East Rutherford, New Jersey. But before the 3 p.m. kickoff, her to-do list for that day included running 26.2 miles at the New York City Marathon.

The average finish time for the 2004 race was 4:37. As an avid runner, Mawicke’s best time was 3:41. The NYC Marathon gun went off at 10:30 that morning, which meant she had only one option that day: to be better than her best.

Word was buzzing about her race, especially after an article describing her challenge made the Chicago Tribune’s sports section. It was titled “She’s Up For a Busy Sunday.” Mawicke recalled what she was thinking at the time.

“All of Chicago knows that I’m going to run, I can’t back out now,” she said.

If Mawicke succeeded, she could finish without disappointing the Chicagoans who were watching on their TV sets to take part in the action. Being busy was an understatement.

She crossed the finish line and successfully made it to the Meadowlands by the first quarter of the game. From the perspective of the viewers on TV watching her, she would have seemed in tiptop shape. Except for one thing left unseen because it was below camera-level view.

“I had blood blisters connected on my toes,” said Mawicke. “It was the most disgusting thing you have ever seen.”

She remembered how gruesome the challenge was as she hobbled into the press box in her suit and tennis shoes, but how it also brought about a wave of praise.

“I put my thumb up in the air like I finished [the race] and everyone started to cheer in the middle of the Bears game,” said Mawicke.

During the game, former Bears linebacker Brian Urlacher came up to her and asked how her race went.


Even after the game, players in the locker room wanted to know how she finished. On that afternoon in MetLife Stadium, the athletes on the field also included a female sports reporter.

“It was just such a cool moment,” she added.

Undertakings such as double-booking her schedule on game days doesn’t come as surprising for the former tennis star at Indiana University.

Growing up in Kenilworth, Illinois, a town just north of Chicago, Mawicke was a self-proclaimed “tomboy” and “jock” whose life revolved around her tennis career. Since she was seven, she played at least 30 tennis tournaments a year. By the time she was eight, she was already a nationally ranked player. Being at the top of her game meant missing a lot of days at school to travel with her parents for matches.

The payoff allotted in a list of accomplishments as she pursued journalism on an athletic scholarship at Indiana University, which included being a four-time Big Ten Women’s Tennis Team champion and two-time Illinois State Tennis champion.

The moment she knew the next step in her career was going to involve sports and journalism came under the mentorship of Chicago sports director Marc Giangreco.

“He hates to say that I was his intern in 1991, because he says that makes him feel old,” Mawicke said.
Watching Giangreco as a journalist made her realize that being able to get paid to watch sports was “the greatest thing ever.”

Being able to cover the teams she grew up watching with her family was just an added bonus. Sundays at her parents’ house meant watching Bears games with her dad, especially since he was a lifelong season ticket holder. Mawicke refers to her mom as someone who “loves the Cubs for life.”

After graduating from Indiana in 1995, she continued her post-graduate journalism education at Medill until 1997 and traded her tennis racquet for the broadcast microphone. Mawicke’s first broadcast gig was as a sports anchor at WBAY-TV in  Green Bay, Wisconsin and she credited working in a small market as the best choice for someone starting out in the business.

“You need to get all your glitches out in a small market, you need to learn how to ask questions properly,” said Mawicke. “You learn how to see the story visually and it makes you a better reporter.”

As a one-man band carrying 70 pounds of broadcast equipment around, she remembered what she did by her third day on the job: called her parents and told them she needed a massage. But being out of her element also taught her a huge lesson.

Just as an athlete refines his or her fundamentals through rigorous practice, Mawicke continued defining her craft. Most of her life she had to prove her capabilities on the tennis courts. Her mission was to ace every opportunity in order to reach the top and it was her competitive spirit that led the way.

She made it to Fox Sports Net and anchored for the Chicago, Bay Area and Ohio regions. She also hosted games for the Cubs, White Sox, Bulls and Blackhawks while serving as a correspondent for the Bears. 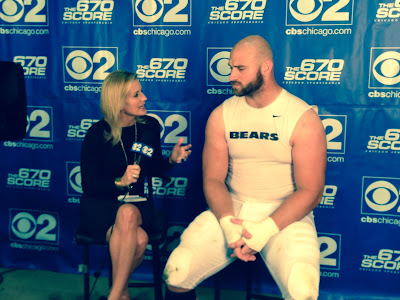 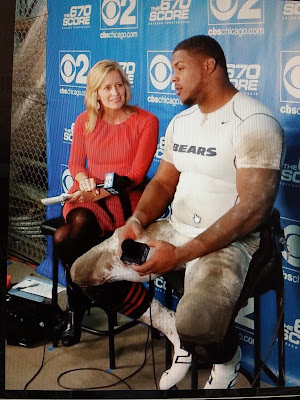 It took five years to get from being the reporter learning imperative career lessons while covering deer hunting season and fish derbies to being the sports reporter back in home court advantage at Chicago’s WBBM-TV.

One thing is certain: she loves her job. Except it’s not just her background as an educated athlete that helps her perform better. She credits being a mom to her two boys – Luke and Jack – as what makes her appreciate her job even more.

“If I’m going to be away from my kids, it better be for something I love, and it better be worthwhile,” Mawicke said.

With her role in the CBS newsroom, no two days are alike and her hours are set merely the night before an assignment. With her role as a mom, her hours at home mean having quality time with her boys.

“When I’m away from them, it makes me appreciate my time home with them even more,” Mawicke said.  “I am a better mom for working.”

Click 'Read More' for our Q & A with the CBS sports reporter! 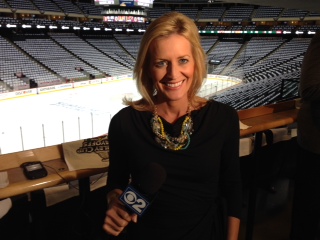 1)   What is one mantra you live by?
One thing I’ll never be, is unprepared.

2)   What obstacles/stigmas have you faced as a woman sports reporter and how did you overcome that?
There are very few obstacles now because there have been so many pioneers. They had to pave the way and I think the new generation should be thankful. Jeannie Morris in the 1970’s who was married to [Bears Pro-Bowler then turned sportscaster] Johnny Morris, was one of the first female sports reporter in the country and in Chicago.

4)   What’s one thing the average person wouldn’t know about you?
I’m a pop culture junkie - I’m a sucker for Hollywood.
I played the drums for five years.
I’m the worst dancer in the world, I have two left feet, my husband will tell you that. I’d rather run a marathon than dance. In my next life, I want to be a good dancer.
Posted by Missy E. at 3:47 PM