Every goal starts with one step: Missy's reflection on her latest 5K run 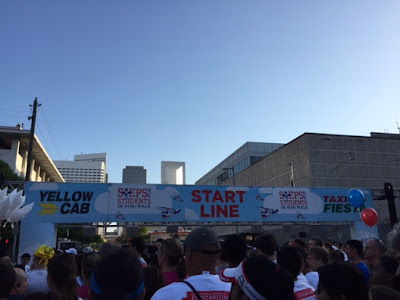 Houston- In late February, I completed my latest race, a 5K or 3.5 mile run, for catholic school education tuition assistance.

While it was a memorable experience because of the record amount of money fundraised by the students, parents and school administrators, I had a miracle happen to me at the end as well.

Click 'Read More' for the rest of the story

I made it to the finish line and decided to wrap my jacket around my waist because I got pretty hot and needed to cool down. I was borrowing my sister's jacket, so in a natural reaction, I put my car keys in the pockets of the jacket and decided to walk around the finish area.

Students, parents, pastors and the like were in good spirits and the good vibes were flowing all around  with laughter and shouts bursting from time to time. I made it in full circle back to the starting line when I decided to make my way out. That's when I checked my pockets. Nothing was there.

The unfamiliar jacket I borrowed had little pockets built-in at the end (how unfunctional!) and I lost my keys. With the hundreds of people gathered around trying to catch a breath or two, I grew anxious just thinking about having to search two blocks worth of concrete for my keys.

Frazzled, a man approached me and said I had a 'holy' jacket. I replied it was 'hole-y' alright and that my keys were missing. He then directed me to the information booth to make a request for lost keys.

On my walk to the booth, I was fighting being defeated and said a little prayer to St. Anthony (the saint who finds things that are lost).

The moment I reached the booth, all I said was 'I lost my keys' and in the same breath, the woman handed me my keys!

Before the keys came back to me, I was going to either be fighting to keep a good attitude about my situation or fighting to not curse myself out, unfortunately after a rather uplifting event.

But in the end, God got me. And I love those moments. He's got you too, you know that right?