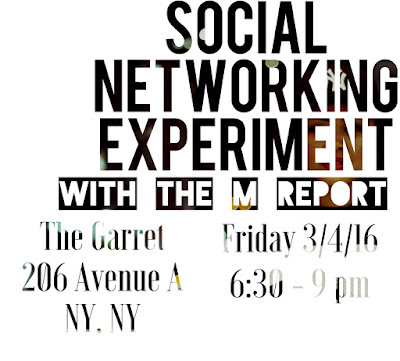 New York - What kind of impact could social 'influencers' make by spreading an idea without the help of social media?

The M Report wanted to find out if word-of-mouth event marketing still holds true in a tech and social media savage culture.

The results were in.


With a handful of 'influencers,' or those on social media with a vast amount of followers, it was a race to find out.

Time, energy and return on such investments were at stake. The influencers' networks were all digital, so communicating through social outlets like Facebook messenger or phone was allowed.

[Related: Data Analytics and its future in sports]

Here are the five takeaways:

1) Create a social strategy using 5 influencers maximum. Be picky! Study their audience and their social behaviors because you want to garner the crowd he or she could capture.

3) With a minimum of 1 week advance notice, share the official flyer with the influencers.

4) Make sure they are allowed to organically share the message or event you are promoting. Tip: the biggest takeaway is the two-way relationship between you and the audience. That means figuring out what exactly benefits them by attending? In this case, it was an opportunity to network with other professionals.

5) Case and point: word of mouth is still one part of the process. Don't take it out. But that being said, it does not capture the entire strategy. Social will always continue to win.

I recently met with a colleague, Mike, who alongside with his team, held a 150-person event in New York City for his organization's launch party. It was an event showcasing an innovative digital cinema experience. I asked how the initial event promotion was done and he responded that it was initially only supposed to be a word-of-mouth, friends and family event. But after using videos with social influencers, it grew. People were telling Mike how they attended the event straight from an Instagram post.

That's exciting and simply reiterates the power of the full social package: word-of-mouth, social influencers, and a two-way relationship with the audience.