Taking A Look Back at the 2018 Award-Winning Articles


A blessing, indeed, that in my first year as a reporter with The Tablet newspaper, our staff was bestowed the "Newspaper of the Year" award by members of the Catholic Press Association.

It's a testimony to the hard work that our small, yet big-hearted staff churns out every week for the Diocese of Brooklyn. My first year going into the streets of Brooklyn and Queens for these stories was eye-opening. Even though I lived in Queens when I studied at St. John's University many years ago, I was able to witness a different sort of beauty within these two boroughs: the beauty of the Catholic faith lived out loud through the people who make up the diocese of immigrants - as Bishop Nicholas DiMarzio always says.

That's because, unlike whatever perceptions arise when one thinks of the word Catholic or Católico, most of the best stories I've come across weren't in churches. The best stories were when I was able to become a part of the faith-in-action, when people acted towards not only what they believed in, but towards what was morally right and true. Don't get me wrong, what was published on those pages weren't stories about perfect people - just imperfect people doing small acts with great love.

Reflecting on this moment, I would like to personally share my thanks to my editors for their guidance and fearless leadership. Most especially to my colleagues at The Tablet who helped me cast my "newbie" net into the shaky waters and guided me to stay afloat. This award also goes out to my mentors - the professors and educators who shared their knowledge, wisdom and yes, Media Handbooks, throughout this journalism journey. I also consider my time spent at Medill very much the cherry on top - so much wisdom and humility gained throughout that time.

Of course, this wouldn't be possible without the dear family and friends. You know who you are. I dedicate this to my Lola (grandmother) Felicidad. She was such an advocate for furthering my education and my faith. It brought me much joy to know that she always knew what I was trying to do with my life. My parents and grandmother were immigrants from the Philippines and as much as I'm proud to be a Filipino-American, they showed me by example what hard work and dedication can accomplish with the faith that can move mountains!

Without further ado, here are the 2018 awards and the stories to accompany them!

You can click underneath the award to get to the story! Judges' comments are listed as well. 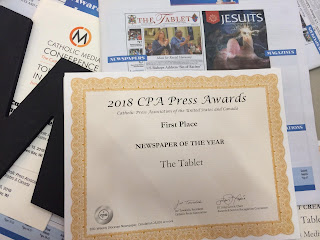 Newspaper of the Year
Weekly Diocesan Newspaper
First Place, The Tablet Newspaper
"The Tablet is a comprehensive newspaper with an extensive reach. The paper is professionally designed and has a variety of sections, adds, opinion pieces and youth-focused stories. Great layout and teasers to attract readers to open the newspaper. The reader definitely gets a substantial newspaper here."

"A beautifully crafted story that outlines solidarity with a religious angle. This chronicle of post-hurricane mission to Houston vividly shows how the trip served a double purpose: To help the victims of the hurricane and to help some of those who traveled to Houston find a sense of purpose and community. Very touching."
(I just wanted to personally say how this award meant a lot. The fact that it was for Best News Writing is awesome because those classes were always the most challenging! Also, a story about the heroes from Brooklyn and Queens who helped in my hometown, double win, H-TOWN!) 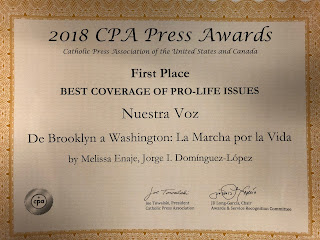