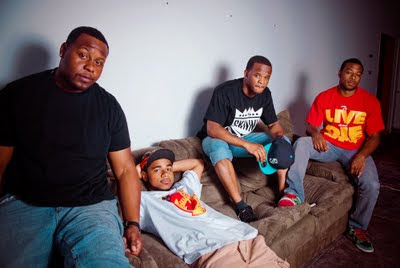 As if the music industry isn’t competitive enough, enter underground hip-hop. Where one artist under a major record label is granted the means to make their music buzz-worthy, underground artists have to do just as much legwork, if not more, in their own capacity. Therefore in an environment not necessarily understood nor easily exposed, where hustle is the name of the game, how can camaraderie exist when everyone is out for their own shine? 2-Twenty, a local group of college students who are vouching to take the new wave of underground hip-hop to the next level, one college kid at a time, seem to have some answers.

“When we first started, we were “the other guys in the room,” says Gene. “But now, it’s like we’re starting to get love because everyone sees how hard we work. If we’re in the building, we’re going to shake everybody’s hand and we’re going to introduce ourselves to everybody and we are going to let you know that we are 2-Twenty. It’s good though. Underground’s great, I love it.”

Gene, EscalatorUp, Haize, and DJ Auditory compromise 2-Twenty. Three emcees hailing from three different states and one hometown DJ are set to take Houston’s college music scene by storm. Having been one of the opening acts for this year’s University of Houston Frontier Fiesta featuring Wale, the group’s initial beginnings were actually a touch of undergraduate fate.

In spring semester of 2010, Calvin Green, better known as Gene, was living in the dorms at University of Houston when a new roommate was displaced. Marc Haize, also known as Haize, was living there as well as an out-of-state by way of Detroit- student. Gene introduced Haize to his recorded music he once plugged while living in Japan during his military assignment with the Navy. Together they shared the connection of both living out of the country, specifically Japan, while their talents meshed to form MH and Gene.

Less than a month later, the two met Lonnie or EscalatorUp, who had to be somewhat persuaded to join them after hearing that he could rap. He agreed and since then, the name of their game consisted of a path filled with trial and error. Trial had taken place at a handful of venues etched in their memory.

Haize could pinpoint the exact location of venues they took up, such as Escape Lounge on 913 Prairie. Or 511 Main, which is Club Heat, and Zula Lounge, where they performed on a tiny wooden box. That event resulted in EscalatorUp literally falling off due to the mishap stage’s incapacity to handle all the hype. During that time, they incorporated DJ Auditory into the scene. This Houston native was to add a special touch to all their shows and help play their music.

The group also figured the next moves required transitioning from the club atmosphere into doing actual shows that garnered a larger crowd. That led to acquiring one of the independent stages at the 28th annual Los Magnificos Car Show. All good except for when they were about to take stage, Chris Brown simultaneously went on to perform his set. With all attention fleeting before their eyes, the setback was still a long way from their club days. Not to mention, this group has a unique optimistic outlook on the struggles they face, be it school, music life or their personal life.

Take it from their single entitled “Sail On” that came out this year. Their sampled Commodores track is a subtle and smooth backdrop to bars that discuss their current reality filled with frustrations.

“I’m kind of like sail on,” says Gene. “No matter what happens to you or what you go through, you just gotta keep it moving, you can’t just dwell on it.”

The group has since released 5 singles from their two mixtapes entitled “School Daze” and the following “Extra Credit.” Other songs include “All That” which is their take on Biggie’s hit “Juicy” with all its similar lyrical themed packaging of envisioning dreams before making it. You’ll be sure to hear some songs heavily influenced by the opposite sex. “Hear Me Out” and “Under-Rated” spit game to the ladies and include the vocal talents that Gene perfected while in high school. Another rapper/singer cliché you say? Just take a minute to appreciate the mixtapes before jumping on the bandwagon, and then one might feel indifferent.

2-Twenty’s come up story is, well, still coming up. They’ve outgrown their days of flipping their pants around like Kriss Kross and memorizing unheard Eminem lines. But they’ve yet to perfect their craft. Still, after a successful experience during their latest shows at Frontier Fiesta, which they’re actually set to perform again next year, to Miller Outdoor Theatre’s “A Night To Remember”, 2-Twenty describes what onlookers might not expect.