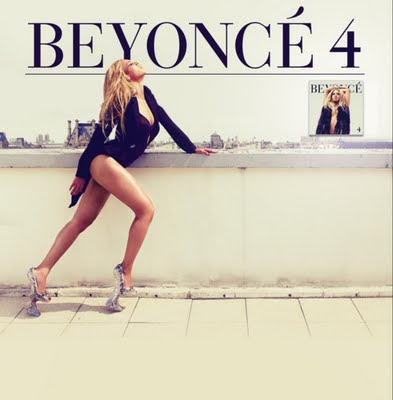 So I was able to sit down with Beyoncé's latest album entitled "4" and here's my brief review.

I'd like to think many artists use their music to portray their current state of mind or what they're going through or what they've been through. Kind of like a journal made through music.

If that were the case with Queen B, she's all the colors on a mood ring. Except the dark gray color, know what I'm talking about? That's because the dark grey color usually represented anger or gloom. And that's not what this album's necessarily about.

It's about falling in love, dealing through love, knowing that you're a ROCKSTAR LADY and having fun! She's head over heels in love with her man (throws up the Roc sign) and she's not afraid to share it with the world this time. I must admit that compared to her last LP, " I Am...Sasha Fierce" it seems that she might have put more time and effort into this album. Bey's said to have made her previous LP under a quick turn-around time.

"4" has great production work with Bey going through her usual vocal ranges. There's the uptempo pop songs that bring a new light to all those nights you had to dance to "Single Ladies" with "Party" featuring Andre 3000 and Yeezy. "Countdown" is up there as well as "Run The World (Girls)" with one unifying common thread. And that is she makes sure everybody knows she will continue to rep her block when she shouts out to Houston, Texas as the city that raised her.

Upon first going through the songs, it took some time to build momentum. Nonetheless, there are some standout songs to choose from such as "Love on Top" and "Rather Die Young." "Love on Top" gives off a 90's throwback hit because the production and style of this song remind me of a song that would contend for the top when superstars like Tamia were still making hits.

The prevalent theme of girl power wasn't dismissed with this album and I don't think it ever will. You can't be mad at that because Beyoncé Knowles will always know how to unite the ladies (and the gentlemen) who know how to dance like there's no tomorrow.