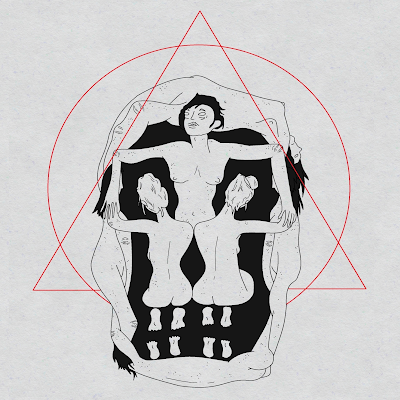 You're somewhat excused if your summer playlist didn't include a track from the DJ/Producer duo better known as KickRaux. A couple of telling signs that the two are gaining traction in the ever-growing genre of trap-hop/dancehall music could be the fact that right after releasing their first full mixtape Harriet Thugman on July 25th, MTV Hive featured their guest mix on the 'Freshman 15' mix a week later.

Get to know the guys who are more than likely remixing your favorite tracks right now, in an exclusive interview with The M Report ( *spoiler* freestyle session included).  Download Harriet Thugman and more after the jump.

1.    How did the fusion of a producer from Jamaica and Columbus, Ohio come together to form KickRaux?

Rieces: I think the fact that we didn't actually think it would work is what made it work. We spent last year chasing placements which was a complete waste of time. Once we realized that placements had more to do with relationships over at a particular label or an artist's camp, we decided to stop being idiots and just go the DIY route. We started doing indie work then eventually focused on remixes because we could control when the songs came out. Q got into dubstep heavy and I was doing all kinds of remixes before I really got into Dancehall mashups & remixes. We were doing it separately so it took a few months to finally realize we were kinda doing the same thing.

I think in like September or something I dropped an EP & he was getting ready to drop one & we ended up talking about how much work it is getting music out there by yourself, next thing you know it's December and we decided to just do the KickRaux project. I wish we had started this last year honestly because working with Q is the easiest thing in the world. We both are dope on our own & we both have A.D.D. so the creative freedom we get because of the type of music that we're making now is why we're having so much fun.Like we don't even know what its gonna sound like 'til it's done.

2.    Describe what it was like under the mentorship of Neal Pogue?
Mentally take us to a day in the studio with you.

Q: Neal is like crazy intellectual man, he's very cerebral, he's like Spock from star trek you know. Rieces met him through his mentor 100 Akres. You ask him a question and his answer is a question. He's all about you discovering things on your own. Even when he's working he never looks at levels and meters he's all about the feeling. So, if something is all out of wack, but it feels good in the song, he'll keep it in there. As far as a day in the studio man it's crazy because Rieces & I are never in the studio at the same time so I dunno what that guy does haha. We work on a ton of tracks individually so we both get to do whatever we want to it & then when we're down we send each other the session. Then we critique the hell out of it like we expect people to and then make changes until it's something we're both happy with. I use Ableton so when I'm starting something I usually grab a custom kit I made then just mess around with warping the sample until I find a cool part of the song.

Most of the songs we dropped are like traditional remixes with verses and hooks form the OG song but we got a ton of rough ideas where its just vocal chops and pieces of the song to make a new song.

3.    Since branching out together as a duo early in 2013, it seems like everything from your presence online to gigs have skyrocketed. What's the formula for such a come-up?

Rieces: OH MY GAWD, NOOOOO SLEEEEEP EVER. We are the epitome of DIY because we don't have a magic team behind us of managers, publicists & booking agents so it takes a lot of work. The biggest thing is like presentation & planning, even if we have a dope song we know that it's not just about a dope song, there's a lot of factors that go into making people listen. We work very closely with our Art Director Tom Hyoos to make sure that the artwork is something that makes people stop what their doing an listen. Our artwork has probably gotten more people to listen to our music than anything else. It sounds crazy but when we're on a blog & all the other songs have the same kinda artwork it makes people go "WTF is that." The other thing is that we are about as interactive with our fan base as you can get, at any moment in the day we're probably responding to a DM or tweet or some other social media notification. The thing is we live by the motto of "nobody cares", we joke about it all the time because it's like you could be the most famous person in the world and people can say nice things about you in your face, but truth is nobody cares lol. So it might be corny or whatever or not really considered cool to be but we're not Hollywood we make sure we find the people that do like our stuff, acknowledge them & make them a part our lives. The next big thing that's going to take our music to the next level is the videos. Our videos have to be on point, so instead of running double duty we put the music out first while we tried to find the right video guy. We just started working closely with Jeffrey Osborne, he's this super dope Cinematographer & Editor. He's done commercials with All-Star MLB pitcher David Price, co-producing a film portion for an upcoming NYMF stage play & just did the cinematography for an upcoming movie with Naomi Judd so the
visuals are going to be INSANE.

4.    Your production clientele range from MIA, Boy Wonder, Katie Got Bandz, to Jay-Z and Mavado. If you could work with anyone next, who would that be?

5.    Let's talk about your people: your followers, your fans. The way you interact is said by allowing them to select songs to remix, to feedback sessions, to Snapchats. How has that worked for you guys?Craziest requests?

Rieces: They're hilarious man like they just keep it all the way real about everything. We could be in the shittiest mood but like all we have to do is check our notifications and we're dying laughing 30 seconds later. It's to the point now that we both have our notifications on silent but we've trained ourselves to check our notifications every hour or so and try to respond to at least a couple at a time. But we feel genuinely connected to them though like theres too many people to shout out, but we got @IfyouseekHina & @bolivianaa are always up late with us studying or doing some randomness, we do movie night on Thursday with @Case4877 & @helliesmalls . Talking to everybody is where we get our direction because they usually tell us what they want to hear from us. When we did our Dr TWERKvorkian mix for Trapstep Network we went out and asked our followers who were some of their favorite new Trap producers & through them we found Dan Farber who we ended up linking with for our Harriet Thugman project, $1 Bin who we worked with on our Single "TWRKIT" (along with Logic Ali of Trapzillas, Ethnikids who we are doing a show with in September in Tallahasse & some of the other new guys that were on that tape.Harriet Thugman sounds the way it does because they told us that's what they wanted. Which makes sense if you think about it because like it's rare that you find a project with like House, Trap, Hip Hop & some of the other genres on the tape on one project. Basically our followers had A.D.D. and they wanted a project that felt more like a mix with a variety of different types of music verses just the same repetitive sound. A lot of runners & fitness people follow us too and they've been telling us that they play our music as part of their fitness classes because of how much it pumps people up when it comes on. We would have never known stuff like that if we hadn't taken the time to get to know the people who follow us.

As far are weird requests, Someone asked us to remix a Country song with a Pusha T verse which is like pretty much going to sound like crap, I mean theres other crazy requests like people asking us to show them pictures of ourselves or to see our dongs on snapchat or other randomness, but hands down I'd say the whole country Pusha T remix thing is the craziest; why would we do that, thats a terrible idea!

Q: We kick off in Minneapolis, we were gonna do a show with our extended family Midnight Panda, Drill Cosby, HPNTK at FREAKSTEP in Atlanta but we couldn't get schedules to match so we'll probably add a date their later in the tour. We're doing Pourhouse in downtown Minneapolis on Aug. 22nd, we get a lot of love in El Paso's so we're coming Sept. 12 then going to Houston a couple days later, plus we're doing a warehouse party in Bridgeport, Connecticut end of September on the 28. Khadafi Dub out of Philly is also working with us to set up a Philly show so we'll have a date for that to announce soon.

Rieces: We're actually shooting our first video in Bridgeport, Connecticut next week with Director John Kovalsky of Luna Vigilo at the same warehouse the shows going to be at. We're also doing Tallahassee around the 20th of Sept and we're close to a deal now with a venue in Ft Lauderdale. We're finishing up all the booking this week then announcing the full tour details next week, we're doing like 10 cities.

7.    If Harriet Thugman was a person, what would she look like?

Thats an easy one cuz we were talking about this on twitter a couple weeks ago. And we all collectively decided that Harriet Thugman is a white girl from Gucci, Maine with a lil booty, Anime character hair, kandi beads, a Krewella T Shirt & loves 2 Chainz basically wifey.

He's probably the funniest dude I've ever met & he's got the same sarcastic humor I do. He's the Trap Game Robert Horry, cause he's clutch & quiet but he's the guy you want shooting that game winning shots at the end of the day.

Please ad lib a hook with the following two words: