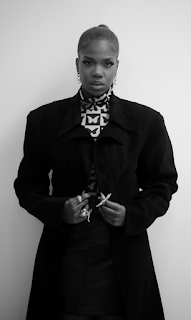 Following a momentous year that has seen her tour across the globe, rapper/singer ENNY returns with her first release of 2022, "Champagne Problems". Produced by Beat Butcha & Tala (with additional production from Will Yanez), the single is quintessential ENNY, marrying deeply intricate lyricism with butter-smooth instrumentals that’ll make you want to hit repeat before you even reach the end. Accompanying the track is a striking new B+W video directed by Jean-Sébastien Degni which was filmed around ENNY’s local community of Thamesmead, South London.

Speaking on the track, ENNY says “The problems I’ve had this year aren’t last year’s problems but they’re problems nevertheless. I call them Champagne Problems, because they are definitely the problems I would’ve rather had two years ago. With this track, it’s nice to just get back to freestyling and rapping as an art."

A compelling and compassionate storyteller, ENNY’s arrival as a true artistic force kicked off at the tail end of 2020 with the release of her breakout single, the anthemic Peng Black Girls. Within the space of eighteen months, she has gone on to be featured in tips lists such as BBC Sound Of.. 2022, BBC 1XTRA Hot for 2022, MTV PUSH for 2022, Vevo DSCVR Artists To Watch 2022, DAZED 100 & NME 100 amongst others, dropped epic performances on LATER With Jools Holland, the GRM Awards, MOBO Awards, Tonight With Target, and Colors (her Colors session received over 19M views alone), and covered a broad variety of publications that included POP, CRACK, The Guardian Guide, Mixmag & Wonderland.

Additionally, she has collaborated with brands such as Levi’s, Adidas, Alhuwalia & Mulberry and performed at this year’s Glastonbury, Wireless, Longitude, Park Life, Board Masters, All Points East, Primavera & We Out Here festivals. Throughout it all, she’s combined her integrity and passion to emerge as one of the most important British voices to emerge in recent memory.